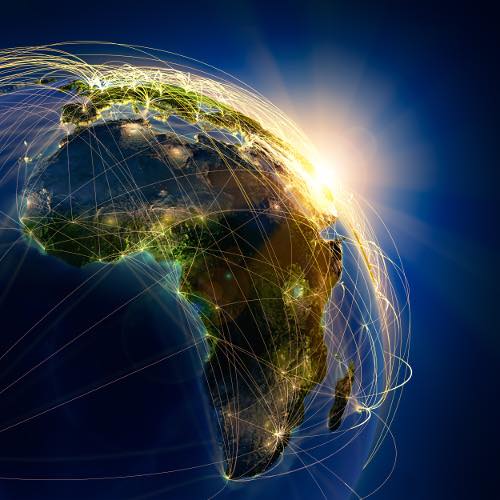 The Rise of Africa: The Most Interesting Facts

The economic observers are unanimous. Africa is in ebullient; getting ready to becoming one of the world's leading powers in the decades to come. "Africa - a continent larger than China, India, the United States, Japan and most of Europe combined - is becoming the next frontier market." (African Development Bank).

According to this stakeholder, with rapidly growing population, increased urbanization, and what is soon-to-be the world’s largest workforce, Africa has an opportunity to transform into a global economic powerhouse".

Africa: soon to be the world's largest workforce

"Over the last twenty years, Africa’s population has increased by 2.5 percent per year" - stated the African Development back in 2014 report "Tracking Africa’s Progress in Figures". Predictions indicate that Africa's workforce will be nearly 40% larger in ten years. According to other official sources such as Deloitte, in its 2015 report "Spotlight on Africa...", Africa's population will reach 1.6 billion by 2030. At the same time, the World Economic Forum argues that while in 2010 there were 370 million working-age adults in Africa, the labour force will have increased to more than 600 million by 2030. In addition, Deloitte pdicts that by 2050, Africa will account for 23% of the global workforce.

Africa will be the new China

Some economic commentators in the international pss are already announcing it. According to an article published in the Financial Times, "... in 50 years, the label "Made in Africa" will be as ubiquitous as "Made in China" is today on everyday items... African products will actually displace many such items that today are made by Chinese companies".

Other experts, for instance, on BurnMedia, encourage investment in Africa "Africa’s the new China - here's why investors should care...". Or Newsweek, with a similar discourse: "China and India get all the headlines for their economic prowess, but there's another global growth story that is easily overlooked: Africa". Moreover, according to the BBC, China and India are also among the major investors in Africa and are often competing for more market shares. This further confirms the potential of the world's second most extensive continent.

The development of African sectors

To ensure the African continent's place on the global podium, governments, development agencies and the private sector in African countries must collaborate on strategic investments (Deloitte).

According to the African Development Bank, with a large population, Africa can harness and build on the expanded workforce to spur economic growth. However, this is conditional on Africa improving access to and equity within health systems, articulating right education policies, and creating employment opportunities".

Africa is aware of these conditions. It is increasing efforts to ensure the education of its young population. According to the World Economic Forum, it is expected that 15 to 20 million "increasingly educated" young people will be joining the African workforce every year over the next three decades. According to this institution, "delivering the ecosystem for quality jobs - and future skills to match, will be imperative for fully leveraging the continent's demographic dividend."

And Africa can do it! In the 2019 Forbes ranking, South Africa and Mauritius continue to be the best countries in the African region to do business in. Nevertheless, it is clear that other countries in sub-Saharan Africa are also making progress in this direction.

Last year, African economies dominated the "Trade 20 Index", the ranking of the top 20 markets with the most promising potential in terms of trade growth - based on their activities over the past ten years (African Business Magazine). Côte d'Ivoire, Kenya and Ghana have gained ground in this ranking (African Business Magazine). The same countries have progressed in the Forbes ranking, and several others, including Botswana, Rwanda, Namibia, Zambia, Senegal and Nigeria.

The main pillar of African economies remains Agriculture, the continent's biggest industry. However, there are other promising sectors, namely Manufacturing (the "Made in Africa") and the Services sector that has been booming in recent years. These include Banking and financial services, Communication and Information Technology (ICT) and Tourism (Economy Watch).

Africa has the highest number of entrepneurs in the world

Today, Africa has the highest rate of entrepneurship in the world (African Development Bank). This stakeholder has found that 22% of the working population are setting up businesses. In addition, Africa’s female entrepneurship rate is also the highest in the world. According to the African Development Bank, small and medium-sized enterprises (SMEs) are currently the biggest formal employers in sub-Saharan Africa.

ICT, in particular, is a niche for Africa in the Future of Work context. There is growing talk about the Future of Work: automative processes, robotics, digitization of services and artificial intelligence. We also take into account this new world of work emerging from increased Web access. Africa is not left behind in this future.

According to the Africa Sustainable Development Goals Centre (SDGC/A), "[t]he revolution in Information and Communication Technology (ICT) helped spad mobile telephony, online banking, E-Health and other technologies throughout the continent".

Sub-Saharan Africa is one of the regions that could fully take advantage of the opportunity of online gig work. According to an Oxford Internet Institute report on "The Risks and Rewards of Online Gig Work at Global Margins", remote working through Internet platforms "offers economic benefits akin to physical migration". Thus, this mode of paid work could lead to a reduction in the unemployment rate, especially amongst young people. It also embodies a potential for human development assistance, as stated in the aforementioned report. Furthermore, this report points out that gig work could "catalyse new, sustainable employment opportunities by addressing a mismatch in the supply and demand of labour globally".

The number of African talent with diplomas or certifications in the ICT trades is increasing. This is no accident. The African Union, in collaboration with the World Bank, has launched the Digital Economy for Africa (DE4A) initiative for Africa's digital transformation. The objective of this initiative is that "every African person, business and government ... be digitally abled by 2030". (World Bank).

In addition, more training options are available, as well as talent development programs such as "Tuning Africa" and the Youth for Technology Foundation's "3D Africa HackforGood" platform in Nigeria.

Nigeria: the digital hub in Africa

It is quite possible that in the years to come, Nigeria will be the country to produce most of the computer engineers on the African continent. The Nigerian state's priority is to make the country a digital economy (World Bank). Moreover, the Microwork for Jobs Creation project was also launched by the Nigerian government to help its people acquire skills so they can make a living from online work (Oxford Internet Institute).

According to a World Bank spokeswoman, "[a]s the biggest economy in Africa with one of the largest populations of young people in the world, Nigeria is well-positioned to develop a strong digital economy, which would have a transformational impact on the country".

Talenteum is the leader of remote work in the African region. As an intermediary between African talent and employers in Europe and North America, Talenteum firmly believes in Africa's abilities. We believe that this continent offers incredible opportunities for investors, exporters, recruitment agencies and companies.

Africa speaks two of the most widely used Business languages in the world, that is English and French. Moreover, according to the International Organisation of La Francophonie and the ODSEF, 85% of the world's French speakers will be in Africa by 2050. This potential does not escape us, as a French company recruiting throughout the African region.

Africa's wealth in terms of Human Resources is extraordinary. We have been drawing on this abundance for several years, to find qualified people in a diversity of sectors and professions. We already have more than 100 talents amongst our collaborators. At Talenteum, we take care of all the steps (legal, administrative and expenses) to organise tailored remote work, so that your company is a success.

The best global platforms for Gig and Remote Work

Training Africa for the Future of Work

Your experience on this site will be improved by allowing cookies.